Morse Code: A Complete Guide with How to Signal SOS

Knowing how to signal SOS in morse code is a crucial survival skill that you may not realize you want until you need it. What many people don’t know is that one of the most influential technologies in the 1800s was the Morse code. It changed how wars are fought and how society functions. Even today, in an age where technology has advanced tremendously, people still want to learn more about this type of communication.

Navy pilot and prisoner of war Jeremiah Denton used Morse code blinking to tell the United States that he was being tortured by the North Vietnamese in 1966. Just by blinking, he managed to communicate his message properly and save his own life.

The world can sometimes be a crazy place, and you don’t know what seemingly impossible and bizarre situations you will find yourself in the future. There are many reasons to learn Morse code, and having the skill to say a few words without actually speaking can mean survival.

In this article, we will go over Morse code’s history, how to learn it, how to do SOS in Morse code, and what are the benefits from Morse code.

In the past, it was a challenge to communicate with someone long-distance. Messages that people sent to each other were transported by messenger birds or horsebacks. When it came to communicating with someone who is in closer proximity, signals that were visual were used, such as fire, flags, and smoke.

All of this changed when Charles Wheatstone and William Fothergill Cooke developed the first commercial electrical telegraph in 1837. However, there was a big disadvantage to the telegraph. It needed six cables in order to function which made the installation process and the device pretty expensive.

Samuel Morse and his assistant Alfred Vail developed a new telegraph in 1837. This telegraph could receive messages only by marking dashes and dots with a stylus on a piece of paper that is moving, and it only required one wire in order to operate. Samuel and his assistant created a coded system, and it represented the entire alphabet and all the numbers.

The system developed by Samuel Morse and his assistant became known as the American Morse Code. However, when other countries of the world decided to use it, there were some issues that came across. The main issue was the Morse code is a code made according to the English language and in order to work with other languages, it needed to be changed.

This problem was solved by Friedrich Gerke in 1848 when he introduced a version of this code system that removed spacing rules and different length dashes – aspects that made the American Morse code pretty complicated. Several languages and alphabets could now use the international Morse code.

However, there were some countries that couldn’t adapt to the international Morse code because of their language, so they needed to make their own version of the code.

How to Do SOS in Morse Code

The alphabet in Morse Code is made out of two basic signals: dashes and dots. Periods symbolize the dots and represent a rapid and quick signal. Dashes, on the other hand, are longer signals and are represented by a hyphen. The very simple method of coordinating the blinking is used to represent these dashes and dots. This, in turn, relays a desired message, such as SOS in morse code.

The thing that guarantees that the receiver of the message won’t get the dashes and the dots confused with one another is the difference in timing between the two. The dots are three times shorter than the dashes. In addition, the time between dashes and dots should be the length of a doth.

One of the ways that Morse code is still being used today is to send a signal for SOS. For instance, the Titanic probably wouldn’t have any survivors if it hadn’t sent out an SOS signal.

Pros and Cons of Morse Code

Even though Morse code was largely used in the past, this system is still relevant in the modern age. In this section, we will go over some of the advantages that Morse code offers.

Now that we’ve gone through the benefits that Morse code offers, we’re going to go over the disadvantages of this system. 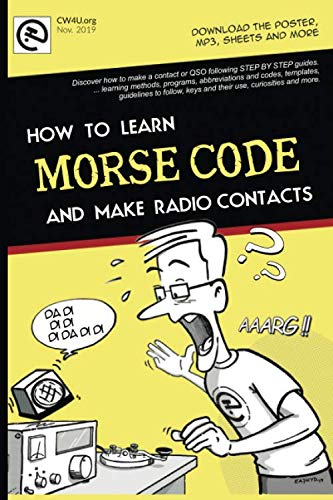 MORSE CODE. How to learn and make radio contacts: New step-by-step manual, from the basics, easily. By EA7HYD
$19.50
View on Amazon

What is Morse code?

Morse code is a technique used for communication in which the characters are arranged in two different signal durations, and this is done by using dashes and dots. The Morse code was created by Samuel Morse and his assistant Alfred Vail.

Amateur radio operators still use Morse code, even today. In addition, Morse code is also being used to send out emergency signals.

What is the machine for Morse code called?

The name of the machine that is used to receive Morse code is a telegraph.

How is Morse code read?

In order to read Morse code, you need to know that it is made out of two signals, and those include dashes and dots. You need to know how to recognize the spaces between these signals and the signals themselves in order to efficiently learn Morse code. The dishes look like hyphens and are long horizontal lines, while the dots are just periods.

How do you use Morse code?

Morse code is used by tapping the combination of dashes and dots and pausing for the proper duration for the gap between the symbols.

Even though advanced technology such as the Internet, telephones, and radio began to replace Morse code pretty quickly throughout to years, this doesn’t mean the Morse code has died.

Besides the aviators who communicate abbreviated identifiers through Morse code, the International Morse Code Preservation society, and the United States Navy intelligence specialists, Morse code is still kept alive today thanks to enthusiasts that keep using this type of communication. Even if you’re not personally involved in any of the above sectors, learning how to deliver SOS in morse code is a skill that could be crucial in saving your life.

Read More
The best survival backpacks are the backbone for your gear. You can have all the fancy tools and…
SSurvival